Today had me hopping over to the St. John the Baptist Catholic Cemetery in New Brighton, MN.  It is a small cemetery, but for some reason it has a number of photo requests on findagrave.com, and being a volunteer, decided to stop in on this lovely Minnesota day.  With the price of gas so astronomic, I usually throw in a few chores, and stopped to pick up a quick sandwich to enjoy in this typically quiet and peaceful spot.

Then the rain came, and a truck with multiple lawnmowers that sat and waited with me.  Then, a lone lady, who parked, put on her raincoat and went and stood quietly for about five minutes near a grave, then slipped away.  And it made me wonder....

Who was she there to see on this rainy afternoon?  She looked no older than 45.  I hoped it wasn't a husband or a child, or even a parent.  Perhaps it was a friend's birthday.  Hopefully it was a grandparent, who had lived a very long and happy life.

As I reflected on this, I realized that "wondering" is one of the many reasons I love cemeteries.  I look at the graves and stones of people I've never met, whose families I will never know, and I wonder about their story.  I wonder what kind of life they had, what was it like when they left the world, who was sad when they left, did they leave the world a better place.  If they were very young, what happened?

The last time I was at St. John the Baptist Catholic Cemetery, my curiosity brought me to some new graves. It was two children, and a little teddy bear was sticking out of the ground along with a few other childlike things.  Not far from them was another new grave, and it appeared this could be their mother.  They all died on the same day.  So I wondered.  A quick search on the internet revealed it was indeed a mother and two children.  She had taken the lives of her children, and then herself. 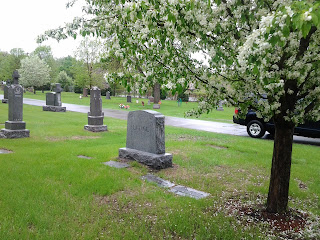 Member of The Association of Graveyard Rabbits